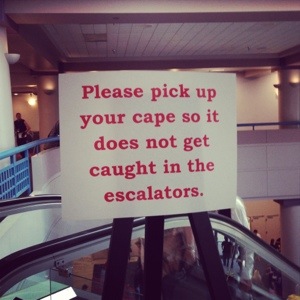 i just loved this sign, it made me smile.

well, everyone, bobbi marbles has her very first albuquerque comic expo behind her. it has been four days since ace ended, and k and i still have a bit of a “hangover” from it. don’t get me wrong, by now we have both caught up on our sleep, have started eating normally again, and we’ve even had some down time to lounge and watch a few movies. (while i iced my carpal tunnel-y wrist. ouch.)

yes, it was an intense whirlwind, the weeks we spent preparing for ace. but it was all well worth it, because the three days of ace that we spent selling, hustling, and talking with lots of really cool people was just so much fun! there’s really nothing like seeing people stop in their tracks so they can get a closer look at our items, then fork over their hard-earned cash to buy something that we’ve put so much work and love into. it is such an incredible feeling.

we genuinely want to thank everyone who stopped by, shopped, chatted with us, and even just cracked a smile or laughed as they looked at k’s designs, when they walked past the table.

i have to say that, even when k and i were just sitting there at our table, when things were slow, we were far from bored! there was some incredibly detailed and well thought-out cosplay going on. and as a self-described voyeur + eavesdropper, i got a kick out of hearing a lot of excited and geeked-out conversations happening. i felt right at home, among so many others who weren’t ashamed to get publicly excited about something they like, something usually considered “nerdy”.

on one last note, i just wanted to say how smoothly everything went for us at the convention center. the staff and volunteers for ace were so great, and they helped make ace an even more enjoyable first time experience for us. so a big thank you also goes out to all those fine people!

we walked away with a lot of great feedback, encouragement, and new ideas, so we will definitely see you again next year, ace!

labels for new cards + screenprinted ears for new “pillow dolls”. aka, tiny hand-cramp inducing tasks of the past few days.

k and i must feed off of the stress of a deadline, because this last week we have ticked off more things on our to-do list than the month leading up to now.  and while i know i always think it would better to get things done in a more timely matter, the fact is that there’s nothing like a looming deadline to poke at that panic button located in my brain.

along with all of our regular merch, we will have TWO new tank top designs, THREE new greeting card designs, a ton of new stickers, a very special new screenprinted and sewed item we are calling “pillow dolls”, and two brand new t-shirt designs.  it is possible that we might have a third design ready by friday, but that’s only if k decides he really doesn’t need any sleep this week, afterall. (did i ever mention k works full time, plays in two bands, does freelance design and printing work, and is required to spend at least a few hours a week with me and our two cats, ON TOP of all of his bobbi marbles work? he’s cray.)

i most definitely will be posting pictures of all of our new items very soon.  however, if you want to stay more up-to-date on the day-to-day of bm, please like us on facebook and follow us on instagram! 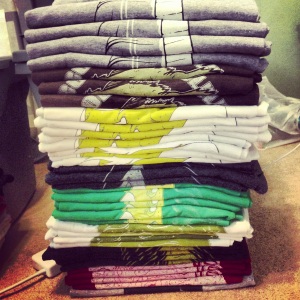 look at us, being all organized and productive with our neatly folded shirts.

once again, i just wanted to give a quick update on what’s up on the bm front. (i hope you can get used to me using “bm” instead of “bobbi marbles”.  it makes me laugh.)  the spring octofair was a great success!  it seems to get bigger and better every time, and this was definitely the best yet.  i’ll admit, i didn’t know what to expect with the slight location change and the fact that the octofair would be held on mother’s day,  but we were busy, busy, busy all day!  we got to talk to a lot of cool people, and when we had time, we were able to check out all the other amazing vendors.  in fact, i bought a gorgeous hand bound journal from shamuball, plus some heart-shaped turquoise earrings from chebeth. if you get a chance, check these ladies’ etsy stores out; they were so friendly, and their merchandise is as cool as can be.

with the spring octofair behind us, k and i are focusing our efforts on ACE.  yes, ladies and gents, it is official; we will have a table set up at this year’s artist’s alley at the albuquerque comic expo from friday june, 21 – sunday june, 23!  i can’t even tell you how excited (and somewhat nervous?) i am that bobbi marbles will be participating at ace.

in the very short five weeks leading up to june 21st, we are going to be designing, printing, sewing, tagging, and basically just preparing for the expo as much as possible.  as touched upon briefly in our last post , k and i are constantly taking in all kinds of inspiration, which produce an abundance of ideas.  but we don’t always turn that inspiration and those ideas into a concrete object.  so these next five weeks are about focused work and dedication.  don’t get me wrong, we haven’t been totally lame about production lately.  we have a new shirt design that k has printed onto adult sized shirts, as well as on children’s sized shirts.  but that’s for another post. check out our facebook  and instagram feeds for more regularly updated bobbi marbles news and merchandise.

ok!  so that “quick update” wasn’t exactly as brief as i had intended (sorry), but i think you can live with it, yeah?  thanks.  :)